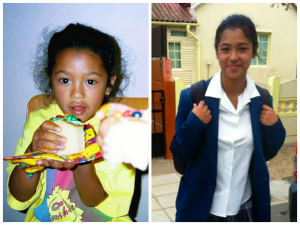 I first met Chelsea when she was just 5 years old; she attended the first ever Camp Sonshine South Africa camp. There was something about her that made her stand out to me and right from day one Chelsea had a very special place in my heart. When our pen-pal program started (and I was still living in the USA at the time) Chelsea and I became pen-pals. At first she drew me pictures and I wrote to her about my life in the USA.

In 2006 I moved back to South Africa and started up the after school program in Maitland Garden Village. Chelsea attended this program and I got to know her parents as well. One day while visiting Chelsea’s house I saw some applications to schools on the table, I asked her mom if Chelsea was going to be changing schools, she looked at me and with a feeling of sadness and desperation told me that she would love to be able to afford for Chelsea to go to a good school, but that there was just no way that she could afford it. Sadly this is the story of far too many South African families. Something inside me stirred and while I could not change the education system in South Africa I believed that I could change Chelsea’s educational experience. Through many phone calls, prayers, interviews and fundraising Chelsea became our very first Camp Sonshine Africa scholarship kid. Chelsea attended Pinelands North Primary from grade 4-7 and we were then able to help Chelsea in getting a full scholarship to attend Pinelands High School where she is currently in grade 10.

Neither of Chealse’s parents completed high school, so already Chelsea is setting a new legacy for her family and her family to come. We are incredibly proud of Chelsea and all her hard work. 11 years after meeting Chelsea I still see her on a daily basis as I get to take her to school every morning. She is an incredibly caring, mature and enthusiastic teenager whose stories I love to listen to. I feel incredibly privileged be a small part of Chelsea’s story and I look forward to being part of what is still to come.

Alison: How did you first get involved in Camp Sonshine Africa? After school program / camp / scholarship program?

Chelsea: I attended the first ever Camp Sonshine South Africa in 2004. Then my parents learnt about the after school program for the children from our community and decided to send me there. I attended all the annual camps.

I was then fortunate enough to be the first Camp Sonshine scholarship kid and I was given a scholarship to attend Pinelands North Primary from grade 4 – grade 7.

Alison: How old were you when you first participated in a Camp Sonshine Africa event?

Chelsea: I was 5 years old.

Alison: How do you think Camp Sonshine Africa has changed your life?

Chelsea: Camp Sonshine has contributed hugely to my life, from the beginning the camps and after school program were a fun place to be and a place to learn. The annual camps were a fun environment for me to make friends and to learn valuable life lessons.

Then, as if Camp Sonshine had not done enough for me, they awarded a scholarship to me! I believe that there is no greater gift than an education and Camp Sonshine Africa has given that to me!

Alison: What do you think would be different in your life if it were not for Camp Sonshine Africa?

Alison: Do you think Camp Sonshine Africa has made a difference in Maitland Garden Village? If yes, what difference do you think it has made?

Chelsea: YES! It provides a place for the youth of Maitland Garden Village to come and engage in a fun, learning environment, keeping them off the streets. They have done amazing things for families and for the community as a whole.

Alison: If you could say something to all the people who give money to Camp Sonshine       Africa to make the after school program, camp and our scholarships possible, what would you say?

Chelsea: A huge, massive, tremendous THANK YOU from the bottom of my heart! Your contribution big or small matters to every single child at Camp Sonshine Africa! I hope to be just like you one day and make a difference too! I hope God blesses you abundantly!

Alison: Do you plan to study after high school? If yes, do you know what would you like to study?

Chelsea: I haven’t fully made up my mind yet, but I am hoping to study literature or teaching.

Alison: What job would you like to do one day?

Chelsea: One day I would like to become a journalist, social worker of an English teacher.

Chelsea: I would use the money to help organizations like Camp Sonshine Africa who are trying to equip our youth.

It was just over a month ago that we celebrated Camp Sonshine International‘s 14th birthday! We ran a Blitz campaign for 48 hours asking you for lots of birthday gifts-for the kids that was!

With your help we raised $1,790! That money went to help bring God’s love and purpose to the lives of 195 New campers at our Philippines location.

The funds were split two ways:

When Abegail Shuck, Camp Calajunan’s contact lead, heard that $515 was headed her camp’s way all she could muster was, “Wow! Thank you so much. This is prayer answered. Wow.”

Her response, along with the abounding joyful responses from the new campers could not have been possible without your help. Because of your partnership we continue to change the lives of children around the world.

Thank you. This is prayer answered. Thank you so much.

“I believe dreams are a way God speaks to our very hearts. It is a way that He is able to express His heart about the things that matter most to Him. Why else would we hold on to dreams so tightly? Why would a newly-wed couple move to the other side of the world within six months of being married to start a children’s camp overseas? Only a dream could be the driving force for such things.”—Kay Landis, author of Carrying a Dream

This year, for the first time in their lives, over a thousand unwanted and unloved Filipino street children were encouraged to dream, to hope, and to put their faith in a better tomorrow, thanks to one couple who followed their Kingdom dream sixteen years ago.

Back in 1998, Kay and Jesse Landis found themselves planning both their wedding and their dream of ministry together. Their dream took the form of starting the first international site of Camp Sonshine in Iloilo City, Philippines.

Camp Sonshine is a day camp out of Immanuel’s Church in Silver Spring, Maryland. The camp was started by David Black, a college student who dreamed of doing something worthwhile for the children of Montgomery County. Over the years, Camp Sonshinehas served thousands of children and has brought hundreds of college-aged student workers together to partake in the world of summer camp. For eight weeks children and counselors experience a summer of unforgettable memories through field trips, crafts, games, sports, water sports, theme days, songs, dances, and relationships. This is the camp that the Landises fell in love with and fell in love at.

When asked why Iloili City and why the Philippines, the Landises acknowledge that God orchestrated it. Jesse’s dream to minister in Asia, Kay’s family contacts, and a church asking for children’s ministry workers, made an easy choice for the enthusiastic couple. With a two year commitment to the new venture, the two headed out to start the first international Camp Sonshine in the summer of 2000.

No one could have prepared the couple for what they were about to experience. Supplied mainly with a small tape player and several devoted workers, the Landises taught and played with approximately 100 Filipino street children. Children who would leave camp to go “work,” who spent their free time trying to earn a living on the street.They were the children of the urban poor. Too poor to attend school, they instead washed cars, opened and closed taxi doors, and sold cigarettes, candy, clothes—and sometimes themselves.

The Landis’s compassion immediately connected with the needs of Iloili City’s children, and consequently their two year commitment in the Philippines turned into a life-long journey of children’s’ ministry around the world. The dream, which had started as a summer day camp, grew into the first fully functional center specifically for the street children in Iloilo called the Camp Sonshine Center Foundation. Now, it is host to several year round initiatives, including a feeding program, an after-school program, and a weekly youth and young-adult bible study.

The start of Camp Sonshine Philippines sparked a new set of dreamers. Today counselors from all over the world who first work at Camp Sonshine Maryland hear and see what so many in the past only dreamed: that  ministry like that seen at the U.S.Camp Sonshine could be done in other countries. Soon after that first summer in the Philippines, other dreamers started day camps in Chile, Guatemala, Northern Ireland, South Africa, Kenya, England and Australia. Today Camp Sonshine International partners with faith-based organizations in 10 countries around the world. Plus, the vision of the Camp Sonshine Center as a year-round respite for street children continues to spread amongst the leaders of these campsites.

As for you, do you love playing with children, consider yourself a creative go-getter, and have a desire to travel overseas? If so, you are a perfect candidate to go on one of our overseas missions trips, where we take the Camp Sonshine program to children in need. Join us in bringing hope, love, and God’s purpose to a child today and apply for a trip this year to one of our overseas locations!

Make our birth story your story, too!